Why have women been so disproportionately affected by Covid-19? Experts explain 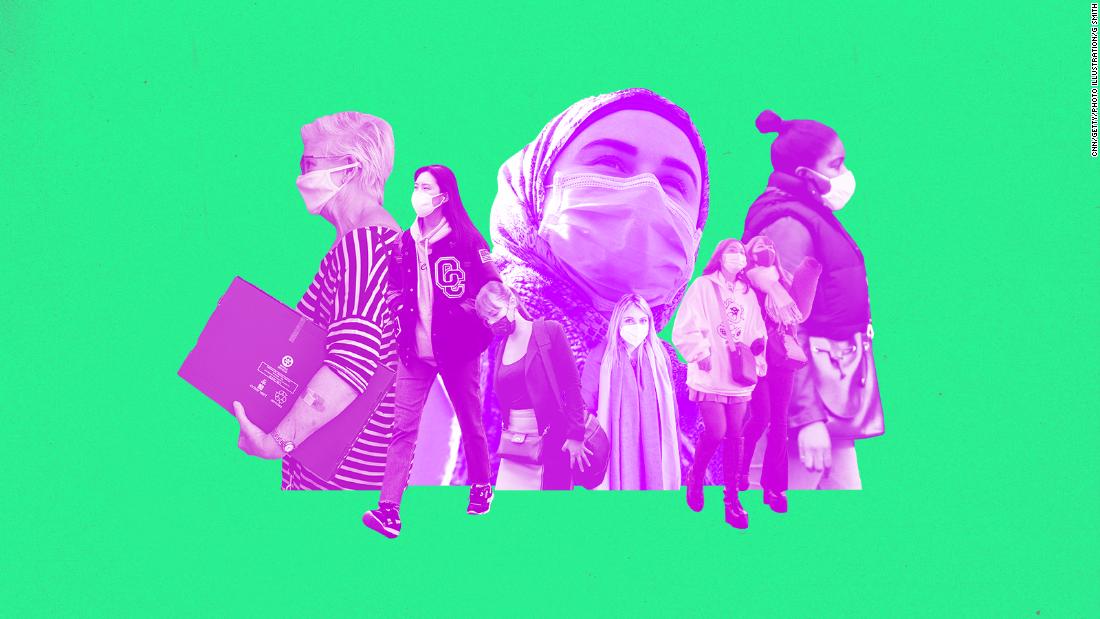 CNN’s findings align with other research that has been conducted over the past couple of years that shows that women have been disproportionately affected by the pandemic. But why have women been so adversely affected? What is it about the societies in which they live and their place in those societies that made them particularly vulnerable?

Across the five areas where women in the G7 said they had experienced the most disruption during the pandemic — future planning, community (their relationships with close family and friends), mental health, access to healthcare and their financial stability — CNN asked experts to help explain the findings in the rich nations of the world and beyond.

This is what they said. Their interviews have been edited for clarity and brevity.

Luisa Sorio Flor, a postdoctoral fellow at the University of Washington and lead author of a recent study into the global impact of the pandemic on women
Similar to what was found in the [CNN] poll, our study shows that the pandemic has exacerbated gender disparities across several indicators related to health and other areas of wellbeing. Women were, for example, more likely than men to report loss of employment, an increase in uncompensated care work, and an increase in perceived gender-based violence during the pandemic, even in high-income countries.

These findings align well with the feeling of being the most hurt by the pandemic reported by women in the poll and might explain the feeling of not being satisfactorily supported by their governments.

The life-threatening and traumatic nature of Covid-19, compounded by the persistent stress of prolonged social distancing, stay-at-home orders, school closures, and working from home, also had a large and uneven impact on global mental health, as reported by colleagues at the Institute of Health Metrics.

Their results indicate that the pandemic contributed to an increase in major depressive disorder and anxiety disorders in 2020, with women more affected than men.

Understanding how the pandemic influenced health-care-seeking behavior, particularly for women and disadvantaged populations, has been limited by data availability. Yet, we see in our study that women were disproportionately affected by disruptions in the provision of sexual, reproductive, and maternal health services. Abortion services, for example in some countries, were considered non-essential during the pandemic.

Unfortunately, data on how age, race, occupational and socio-economic status, migration status, sexuality, disability, and other conditions differentially impact women is also still limited. Even when we talk about the gendered impacts of the pandemic, we are mostly restricted to women and men, excluding gender minorities.

We do know that women with multiple or compounding vulnerabilities are especially likely to bear the brunt of this public health crisis. As an example, immigrants, people from minority racial and ethnic backgrounds, and women who are in poverty, are disproportionately represented in low-wage and informal positions, and frequently lack social support, making them more likely to experience a larger burden of the economic impact of Covid-19.

These results have important policy implications. This differential impact emphasizes the need to explicitly consider gender in post-pandemic recovery plans to address both immediate and long-term impacts of this pandemic through research, public health and practice. This will ensure that many decades of previous progress towards achieving gender equity in the world is not stalled or reversed.

Timo O. Nieder, associate professor at the University Medical Center Hamburg-Eppendorf and author of a study on the impact of Covid on transgender health care in upper-middle-income and high-income countries.
Our study, conducted in 63 upper-middle-income and high-income countries, showed that transgender people suffered under the severity of the pandemic, especially due to the intersections between their status as a vulnerable social group, their high number of medical risk factors, and their need for ongoing medical treatment.

For example, trans people experienced restrictions in access to transgender health care such as hormone prescriptions. Such services were considered elective and thus were postponed due to the pandemic. The difficulties were greater for people who lived in regions with low-level transgender healthcare provision.

Since the beginning of the Covid-19 pandemic, 35.1% of the participants in our study reported suicidal thoughts. And 168 reported having attempted suicide during this time.

Since the CNN report also lists “mental health” and “access to health care” among the areas where women experience more pandemic-related disadvantage compared to men, an overlap between bias against women and transgender people stands to reason. The pandemic has exacerbated both the extent of unfair disadvantage and the difficulties that accompany it.

Nanyanzi has been involved in conducting public opinion surveys on Covid in East Africa on a wide range of subjects. Twaweza’s latest survey, focused on gender, is published today. She told CNN:

The closure of schools as a pandemic response helps explain the rise in teen pregnancy. Schools provide a safety net for girls and this was really clear once they closed. Teen pregnancy increased followed by early marriage. Some girls will lose years of schooling; others will never return. Their life course changed and how this is managed will have lifelong impact.

The nature of our patriarchal society means that the Covid-19 pandemic has made existing structural inequalities worse and the voices and experiences of women are much less likely to be heard in decision-making spaces during the recovery period.

Michiko Ueda, associate professor in the Faculty of Political Science and Economics at Waseda University.

A study Ueda co-authored on suicide and mental health in Japan analyzed monthly suicide statistics between January 2017 and October 2020. It found that suicides among women increased by 70% in October 2020, with women under 40 showing the greatest increase.

We are still trying to figure out why we have experienced an increase in suicide only among women, but not among men, and why the increase was observed among relatively young women.

One potential factor is the economic impact of the pandemic. We know that the industries that are affected most by the pandemic are more likely to be served by women (e.g. tourism, food service) and they were hit hardest. Similarly, women tend to have precarious employment status in Japan (such as part-time, contract-based work), and a massive number of workers with a non-permanent position lost their job at the beginning of the pandemic. Again, they are more likely to be women.

The fact that women in Japan were the only ones in CNN’s poll to say Covid-19 is their top present concern is interesting. Compared to other G7 countries, the impact of Covid-19 has been much less in Japan, in terms of the number of cases and deaths. However, our life is still constrained by Covid-19. Less than 30% of the population has had three doses of a vaccine, not because they are reluctant to get a booster shot, but because it’s not widely available yet, which might have contributed to their high level of concerns.

‘In the UK, the majority of pregnant women working outside the home were not given risk assessments to ensure they were safe’

Joeli Brearley, founder of Pregnant Then Screwed a charity which took the UK government to court for indirect sex discrimination for the way its self-employed income support scheme — introduced in March 2020 in response to the pandemic and intended to pay grants worth 80% of someone’s average monthly profit for a three month period — was calculated.

The self-employed income support scheme was found by the Court of Appeal to have indirectly discriminated against new mothers in the way it was calculated: if you had taken a period of maternity leave in the past 3 years then you would receive a much-reduced payment compared to your childless or male colleagues.

We heard from couples who did exactly the same job, but the mother received a payment that was less than half of her partner because she had taken some time off after the birth of their baby two years prior.

Although you could apply to be furloughed for caring reasons, a survey conducted by the British Trades Union Congress found that 71% of mothers who requested to be furloughed had that request rejected.
Our research found that in July 2020 fewer than half (45%) of pregnant women working outside of the home were given risk assessments to ensure they were safe. This left them terrified.

This gender-blind policymaking resulted in the deterioration of women’s mental health. Indeed, analysis of NHS data found that the number of mothers requesting mental health support increased by 40% in 2021, compared with 2019.

Stories of the week

A new report finds that skin whitening products containing mercury levels that are thousands of times over permitted limits are readily available on the world’s biggest online retailers, including eBay, Amazon and sites owned by Alibaba.

“We are painfully seeing that refugees are selectively welcomed, and war criminals are selectively punished. It’s not just the western media that is biased; it’s the western world.” CNN’s award-winning international correspondent, Arwa Damon, writes powerfully about the gross hypocrisy of the West’s refugee response.

I saw Ukrainians welcomed with open arms. And Syrians corralled like cattle

Written by Adie Vanessa Offiong
Mia Amor Mottley became the eighth Prime Minister of Barbados in May 2018, and the first woman to hold the post.
Mottley has become known outside her country for her powerful speeches given at global events. At COP26, the climate summit in Glasgow last November, Mottley said: “Failure to provide the critical [climate] finance and that of loss and damage is measured in lives and livelihoods in our communities. This is amoral and it is unjust.”
That speech, posted on the UN Climate Change Youtube channel has more views than those delivered by the famous nature broadcaster, Sir David Attenborough and former US president Barack Obama at the same event.
Under Mottley’s tenure, Barbados became a republic when it removed Queen Elizabeth II as its head of state and elected Dame Sandra Mason as its first president in 2021.
Mottley was born in Barbados in 1965 and received a Bachelors degree in Law from the London School of Economics in 1986, before joining politics in 1991. As Minister of Education, Youth Affairs and Culture at 29 years old, she was Barbados’ youngest minister, and later its first female Attorney General (2001).
In December 2021 Mottley was awarded the Champions of the Earth Award, “the UN’s highest environmental honour,” for her policy leadership.

Other stories worth your time

“I testify and tell the world: the war in Ukraine is not a war “somewhere out there.” This is a war in Europe, close to the EU borders. Ukraine is stopping the force that may aggressively enter your cities tomorrow under the pretext of saving civilians.”

5 thoughts on “Why have women been so disproportionately affected by Covid-19? Experts explain”